JPEGmini is a patented photo recompression technology, which significantly reduces the size of photographs without affecting their perceptual quality. The technology works in the domain of baseline JPEG, resulting in files that are fully compatible with any browser, photo software or device that support the standard JPEG format.

JPEGmini is capable of reducing the file size of standard JPEG photos by up to 80% (5X), while the resulting photos are visually identical to the original photos. The JPEGmini algorithm imitates the perceptual qualities of the human visual system, ensuring that each photo is compressed to the maximum extent possible by removing redundancies, without creating any visual artifacts in the process. This enables fully automatic, maximal compression of photos with no human intervention required.

JPEGmini technology has two main components: The first is an image quality detector, which imitates the perceptual qualities of the human visual system, to determine the maximum amount of compression which can be applied to each individual photo without causing visible artifacts. The second is a unique JPEG encoder, which adapts the JPEG encoding process to the original photos, creating the most compact representation of the photos that is possible under the JPEG standard. Combining these two components enables JPEGmini to achieve an extremely high recompression ratio of up to 5x, or 80% reduction on digital photos, depending on their resolution. 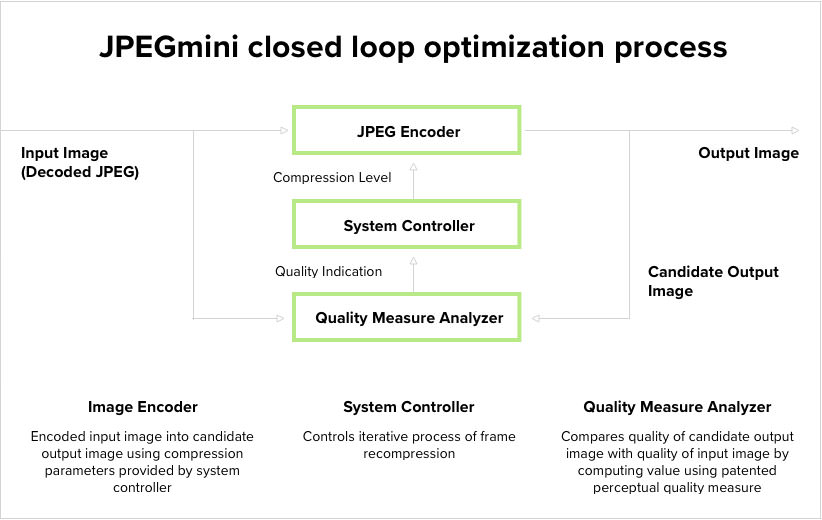 The table below summarizes the file size reduction ratios achieved by JPEGmini for various photo resolutions.

Subjective tests, which were conducted according to the ITU BT.500 standard, have shown that the original JPEG photo and the recompressed JPEGmini photo cannot be distinguished by average users when displayed at 100% zoom on a computer monitor, or when printed at 200 DPI on photo paper.

So far, 17 international patents have been granted for various technologies included in JPEGmini, and two papers describing the technology have been accepted and presented at the prestigious SPIE Electronic Imaging 2011 conference in San Francisco.

Using JPEGmini in image-rich websites improves the user experience by reducing page load time, and reduces the site’s bandwidth costs. Implementing JPEGmini in end-user devices such as cellular phones, cameras, and personal computers reduces the storage requirements for photos, and the time and bandwidth required for uploading the photos to online services. In large photo-centric data centers, JPEGmini can reduce Total Cost of Ownership (TCO), including storage, bandwidth, electricity, and floor space.

The JPEGmini Pro app is a consumer desktop application which enables users to free up valuable space on their internal and external hard drives, upload photos to the cloud much faster, and store more photos in their online photo accounts.